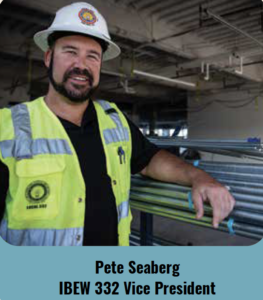 “Organizing Blue Arc Electric into the union is a win for Local 332, for Blue Arc, and most importantly, for the members. It’s a monumental win in our history to bring such a large nonunion shop into the Local.”

“It’s important to grow our union by organizing new members and adding quality contractors like Blue Arc. By doing so, we instantly increased our market share by $10 million and put numerous members to work. Additionally, the more we control our market, the stronger our position at the bargaining table is to negotiate our contracts. This drives our future success, affecting everything from the ability to build our brand-new training facility, to keeping our pension plans well-funded.

“Blue Arc is the largest and most successful nonunion shop we’ve ever organized in 332 history. It took five years of building a relationship and negotiating.”

“Welcome Blue Arc and our 39 new union members to the IBEW Local 332 Team!” 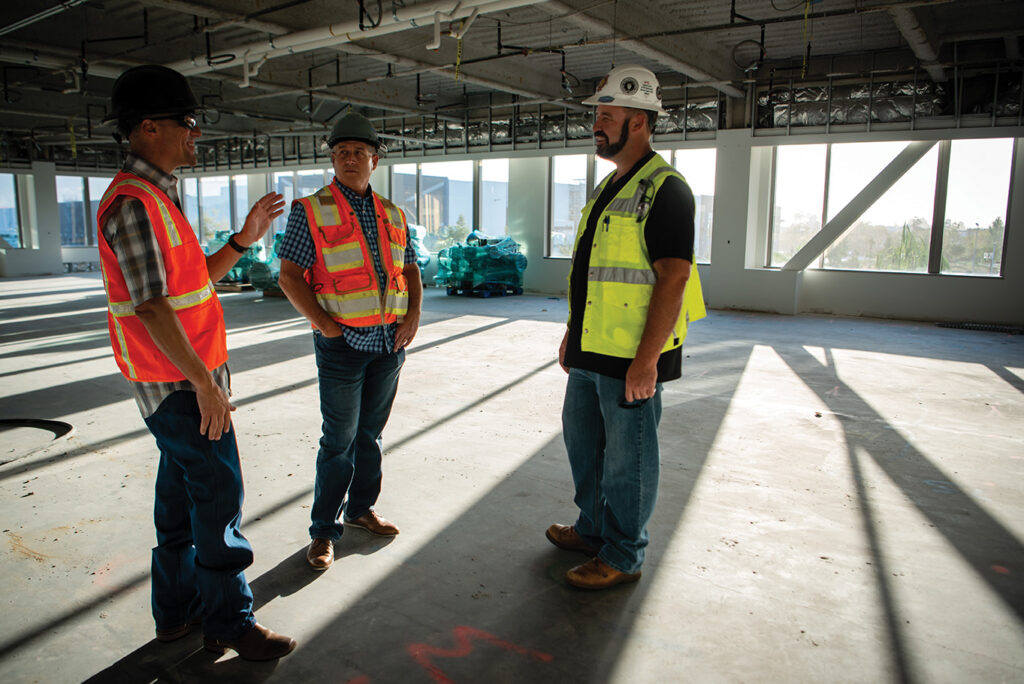 “2023 will mark 20 years that Blue Arc has been in business. In that time, we generally did a few million in business every year, with $8.9M as our record. We had always been successful in the nonuunion market, but we had to turn down two to three times the work simply because we didn’t have the manpower.

“We thought about the business we were losing and forecasted what the overhead expense of going union would be. There was a risk because we’d lose some clients. When we decided to take the plunge, some doors closed, but three times as many opened. Now we have a different problem, in that there’s $21 million of work in the pipeline, and we have to grow really fast.

“Within the first couple weeks of being union, we hired a bunch of members, and went from a 39 to 50-man shop. We have nothing but nice things to say about the quality of the IBEW workforce. We’ve never had this level of skill and professionalism with new employees. We’ve had to survive hiring people with very little experience. With the union, everyone who has walked through the door has been stellar.

“Going union is a profound commitment, not just to the contract, but to the culture, and to holding ourselves to the highest standards of work and community. We look forward to a bright partnership with 332 to work as a team and lift each other up.” 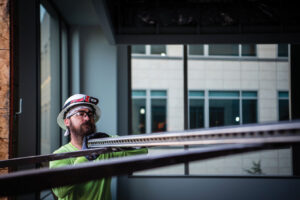 “I entered the IBEW apprenticeship in 2005, and have been with the union ever since. I took the job call for Blue Arc about three months ago, and so far it’s going great.

“They are a smaller shop, so they don’t have hundreds of thousands of dollars to throw around, but they really take care of their employees. They ensure the small things are tended to so
the job is a pleasure to go to. Blue Arc cares about us and has welcomed 332 workers into their family.

“I enjoy the trades and building stuff. I look at it as a craft: you build something, you look back, and it’s still there. I take pride in what I do and spend that extra time to do it right. That’s the union way.

“My advice to nonunion electricians or people trying to get into the apprenticeship is that if you’re not accepted to the union, keep trying. And if you are an apprentice or journeyman, take pride in your install. Once you walk away from your work, it’s yours, so get it just perfect.

“I’m so tired after work, so I like to just spend my extra energy on my partner and our two kids. We try to have family outings by going for a walk or even just staying at home to have quality time together. It’s a good life.” 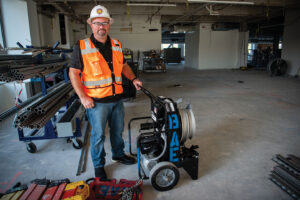 “I’ve been with the union for 26 years. I was the first Local 332 member to come over to Blue Arc, and I helped with the transition.

“Prior to my journey in the IBEW, I was a high school dropout, working as a grocery clerk and looking for a career. My father was a union electrician and always pushing me to take the test. I finally did, entered the apprenticeship, turned out, and eventually became an instructor at the 332 training center. It’s ironic that someone who never finished high school would become an instructor.

“I got a call from Javier Casillas back in February, asking if I’d like to go work for Blue Arc. He thought it might be a perfect fit for me because they needed someone who was familiar with the latest installation methods and best practices, but also understood the culture of being an IBEW member from both the field and office perspectives. It’s unprecedented for a successful nonunion company like Blue Arc go union. I’ve never seen it in my career. For it to work, they have to grow, and the stakes could not be higher.

“In my free time, I like to golf. But to be honest, right now, I am completely focused on getting Blue Arc to where they want to be and doing whatever it takes to move the company forward.” 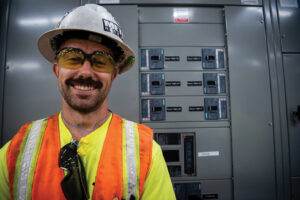 “I’m a local guy: born and raised in the South Bay and live in Santa Clara with my two dogs. I actually went to high school with the son of Blue Arc’s owner, which was how I got my foot in the door nine years ago. Before that, I did retail and security.

“I enjoy hands-on work. I build stuff, and it fits into my hobbies and interests of working with my hands. At home I do a lot of woodworking, a little bit of metal work, and I spend most of my time outdoors tinkering.

“When I found out the shop was going union, I was excited because it creates more opportunities for bigger jobs with more manpower. It opens up a window to learn and do work you haven’t done before, whereas small jobs can get repetitive.

“So far the union has been great– everyone has welcomed us with open arms!” 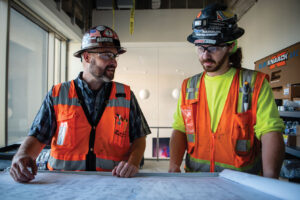 “I remember in high school, they were pushing college, college, college, but in wood shop they said, ‘don’t forget about the trades.’ I was going to school to pursue a degree in biochemistry, but I couldn’t be in school for eight years and needed to work sooner. I love that I ended up in the trades.

“I like that the trades offer a hands-on way of learning; you can use a wide range of skills; and it’s stimulating mentally and physically.

“I’ve been at Blue Arc for three years, and when I heard we were going union, I thought I was getting a golden ticket. It’s the opportunity of a lifetime to be in the union, with the standard of living, the benefits, and the brotherhood. It’s the ideal future handed to me on a silver platter–not that I don’t have to work hard, but it’s a good way for that hard work to pay off.

“The union is the idea that we are the working class, we’re the people, and we’re all in it together. I’m talking not just about the electrical trades, but all union trades. We have a sense of brother and sisterhood, and we have each other’s backs on the job, in the apprenticeship program, and in life.” 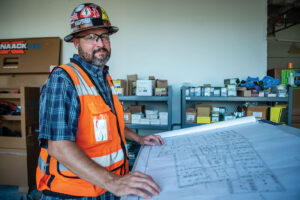 “I’ve been an electrician for 24 years–it’s my lifelong career. I like the design aspect of taking a blank set of drawings and detailing it all out. My favorite is building an electrical room and designing how all the conduits leave the panels and switch gears. I also enjoy piping open ceilings and exposed electrical work to make it look aesthetically pleasing. I take pride in installing clean electrical work with all my brothers and sisters.

“I was with Blue Arc for about 12 years before leaving to join the union. As I got older and wiser, I felt that benefits, retirement, and steady pay increases were a higher priority. I stayed in contact with one of the owners, and he asked questions about how the IBEW worked. When they decided to make the switch to union, I jumped at the chance to go back and help the company get to the next level. It was like the feeling of going back to my old home, and I’m happy the opportunity fell into my lap.

“I like being in the IBEW because of the brotherhood feeling, how things are organized, and the security of workflow, benefits, and retirement. My family is growing. My girlfriend and I recently had a little girl, and with our other two girls, our rental feels small. We want to buy a house with some land where we can have horses and space to work on classic cars. Having a union job and the security that comes with it will help us get there.”