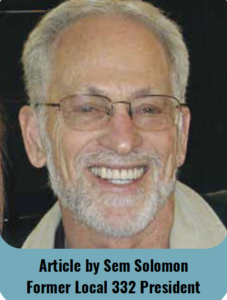 In 1988, I was on a job in San Jose not far from the airport. While working on the lighting system in the ceiling using a 10-foot ladder, I noticed a first-year female apprentice trying to bend a half inch conduit on the floor near my ladder. She was using a method I had never seen before in my 25 years in the trade, and not having any success.

I climbed down the ladder and demonstrated the proper technique with the right tools. After a while, the foreman came by and said the shop superintendent wouldn’t be pleased to see me instructing another person instead of doing the job I was supposed to do.

My response was that the reason an apprentice makes far less than a journeyman was the on-the-job training, so they could become productive in the trade. A properly trained apprentice can be as productive as a journeyman at a far lower cost, and that is the payback for the training they receive on the job. Furthermore, I also told the foreman that if the shop super didn’t agree with that concept that I–as the current president of Local 332–could arrange to have him meet with the JATC trustees. They would be glad to explain it further. That was the end of that dialogue.

Many years later while I was working on a job as a foreman, the same woman–who was now a journeyman I didn’t recognize–was put on my crew. Our job was to set up the panels, and the complete electrical distribution system for equipment was in an area covered by a sloping metal roof. I assigned her the job of installing one-inch conduits from the equipment panel, which had been installed on the concrete wall of the existing building. The conduits had to be run up to the roof structure, and then had to be bent more than 90 degrees to follow the sloping roof line. As the conduits followed the roof down to a particular point, they then had to be bent less than 90 degrees to head to a rack that would lead them to the equipment they were going to feed. The conduits then followed the rack, parallel to the ground, to each piece of equipment.

The sister did an excellent job. After a while, the general foreman came by and exclaimed, “Man, can that lady bend pipe! What a beautiful job she did.”

I approached the sister, and told her what the general foreman said. I then asked her, “Who taught you to bend conduit?”

Her response was, with a big smile, “Don’t you remember? You did when I was an apprentice.”

I realized right away that I had forgotten, that yes, I did teach her many years before. Her performance was my payback for taking the time to instruct her. We smiled at each other, and the thought that has been running through my mind ever since then is that the time spent training will always pay off.