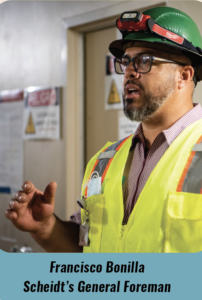 “I’ve been with Local 332 for 26 years, and O’Connor Hospital has been one of the toughest jobs I’ve ever worked on. We are retrofitting a 1953 and a 1969 building up to 2022 state standards. It’s an active hospital with many challenges, including scheduling conflicts, over-congested ceilings, and poorly designed drawings. We are installing per HCAI/OSHPD specifications, which is much more difficult than standard NEC specification.

“Every day my IBEW team – made up of nine men and women – does a fantastic job. When members come here, I want them to enjoy their jobs, so I encourage a positive work environment in order for them to focus on their work. Our brothers and sisters carry themselves in a very professional manner, and O’Connor Hospital staff and the construction management team are grateful for our hard work.”  – Francisco Bonilla, Scheidts Electric General Foreman

On the Job with Scheidts Electric 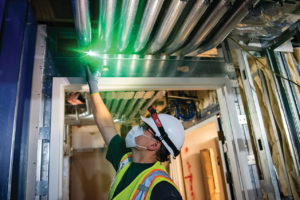 “I was born and raised in San Jose, and I was a nonunion electrician for five years. Then, I was always living check to check. I felt like I couldn’t make it here and was going to have to move out of state. But now I’m making IBEW apprentice wages, and if I do good with the program, I’m going to be set to stay in San Jose.

“I’ve always wanted to be in the IBEW – it’s a dream of mine. Every time I’d see 332 workers at the job site, I wanted that to be me. I applied a couple years in a row, and when I finally got in, it was a dream come true.

“I love the apprenticeship. I was expecting a whole lot, and it has exceeded my expectations. On my first day, everybody was trying to teach me something. I never felt that way before, because in the nonunion world, everyone is out for themselves. Here, it’s an even playing field, so everyone helps each other out. You’re only as strong as your weakest link, so if you lift everybody, it’s better for the union as a whole.

“Being in the brother- and sisterhood of 332, it’s a career, not a job, and there’s so many opportunities for growth. The electrical field is always changing, and the future needs electricians. A lot of jobs are taken by robots, but they’re never going to take our job, especially because we’re part of one of the strongest locals in the IBEW.” 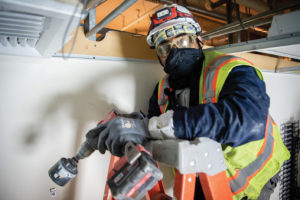 “I went through the 332 apprenticeship and turned out in 2003. In almost 25 years in the union, I’ve really seen it expand to include more members and become more diverse.

“I like the trades, because I like the people. I used to be a basketball coach for 15 years. The trades are like basketball: You need teamwork to get the job done. I have a reputation for smiling on the job. It’s contagious and leads to people accepting you, and you accepting others to build that team.

“I’m one of the original members of 332’s Electrical Workers Minority Caucus (EWMC), which is an IBEW International committee. We started our chapter in 2014 and became official in 2017 under Dan Rodriguez. Our goals are to educate members about different races and sexual orientations, accept people as they are, and stop harassment and discrimination.

“For me, I have taken abuse, and it goes in one ear and out the other. But if you discriminate against a brother or sister in the union, I can’t sit by. The EWMC is here for anyone experiencing problems or just needing to talk.”
To join the EWMC, contact Anthony Hernández | 408.605.9622 | hernandez.anthony332@gmail.com 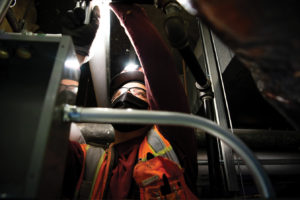 “I started the apprenticeship in 2014 and turned out in 2019. Before that, I used to make sandwiches at Panera. It was a big jump to the trades, and it was the best decision I ever made.

“Last year, I worked as a foreman and had my own job, and now I’m working at O’Connor Hospital as a journeyman. When you’re foreman, you’re responsible for any problems that arise. But it’s less stressful to be a journeyman and just work with the tools.

“O’Connor Hospital is the first remodel job I’ve done. There’s a lot that can’t be removed. It’s more difficult than a new build where you have free rein. There’s a lot more critical thinking between balancing prior systems with new systems. My favorite thing to do is conduit work. I like getting it into tight places, and it’s what I’m best at.”

“I love being in the union. Everyone has your back, and we are well-compensated for the work. I always tell my friends, ‘If you’re looking for a change, take the test, and give it a shot.’

“I was born, raised, and still live in Hayward. I live in the house I grew up in and took over the mortgage there. There’s no way I could have done that working at Panera. In my free time, I’m starting my own weekend DJ business. So if any of the members are getting married, let me know!” 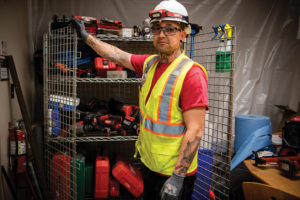 “I’ve been an electrician for 21 years, but in the union for 16. When I organized in, I had two choices: intermediate journeyman or apprentice. I chose the apprenticeship as all my training was on the job. I knew if you hooked this part to that part, it worked, but I didn’t know the theory behind it. Going through the apprenticeship, I got to learn all the mechanics and science that make up our trade.

“For me, being a part of the IBEW was about more than knowledge, but the whole experience of camaraderie and cementing the bond of brotherhood. It’s the best decision I ever made.

“I’ve been a journeyman since 2011. I took a call for Ray Scheidts last November. After a couple months, I got pulled aside, was told they liked my work ethic, and was made foreman.

“At O’Connor Hospital, it’s the first time I’m working in a hospital environment. Everything is built to HCAI/OSHPD standards. The requirements for installation are a lot more stringent because you’re dealing with patient care centers. Many of the specs for these jobs are so specific that it makes the job tricky sometimes. I think that’s a big reason why we love being electricians. There’s always a challenge. And who’s not up for a challenge?”

Spring Apprentices of the Month