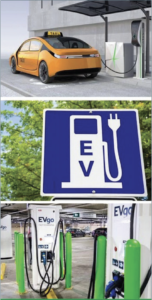 The IBEW is at the heart of President Biden’s proposed infrastructure bill, the American Jobs Plan, and would be the largest investment in American infrastructure since World War II.

The bill passed with bipartisan support in the Senate and is moving through Congress. It includes plans to modernize the electric grid, expand access to broadband internet, and electrify the transportation sector, including public passenger rail, ports, roads, bridges and airports. The plan will create well-paid IBEW jobs with strong labor protections.

Key to Biden’s plan are 500,000 new electric vehicle charging stations and the standardization of the buildout of the nation’s EV infrastructure developed through collaboration with the IBEW.

The IBEW has also been front and center with White House officials, industry  leaders and agency procurement officials about transitioning the entire  federal vehicle fleet from gas-powered to electric. This move would replace  more than 600,000 cars and trucks with an all-electric fleet. It would accelerate the advancement of America’s industrial capacity to supply domestically produced, zero-emission vehicles and electric batteries while creating well-paying union jobs in manufacturing, engineering, and the skilled trades and significantly cut the federal government’s carbon footprint.

When it comes to building the electric vehicle charging infrastructure, there is no better model for scaling up and training the workforce than the IBEW and National Electrical Contractor Association’s jointly administered program. We have over 1,000 signatory contractors, spread across all 50 states, who are using EVITP credentialed journeymen.

“We have been around since the inception of electricity,” said the IBEW’s Austin Keyser. “There isn’t an inch  of U.S. land that isn’t served by a local IBEW/NECA training center,” Keyser  said. “As the market grows, we can instantly grow with it using local workers.”

Biden Working Overtime for Us 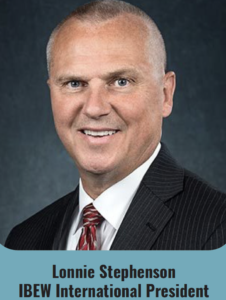 “The Biden administration may  be only a few months old, but it  is operating overtime to get the  United States back on its feet.

“Every day, President Biden  recognizes the primacy of

movement. Whether he is

expressing his support for a  historic organizing campaign or  appointing union members as  key personel in his administration,  never before has a president been  so public in their support of the  values that the IBEW holds dear.

“[Biden’s infrastructure bill] is a  once-in-a-generation chance  to set America on a path to  prosperity and prevail in the global  economic challenges we currently  face.”

332 Women Members Teach Other Women: An Interview with Kim Davis

From the President: Conduits for Change